Looking Back On The Top Stories From 2020

At times it felt like 2020 would never end, but now the year is finally coming to a close. Before we move into 2021, here’s a look back on KYUK’s top stories from the year we’ve just survived.

Bethel began the year with a unique distinction. It became one of the few places in the nation where you can buy marijuana, but not liquor. Bethel’s only liquor store closed following a vote to enter a more restrictive local option status. Shortly after, Bethel’s first two marijuana stores opened.

Also in January, the Bethel Fitness Center closed when the pipes for the pool froze. It reopened a couple weeks later. The city and a subsidiary of Bethel Native Corporation are in court over the cost of the repairs.

In February, searchers found four missing Nunam Iqua children alive together in the snow. The four had survived over 24 hours alone in freezing conditions. They spent the night together forming a human shelter for the youngest, a 2-year-old, to help him survive the cold.

In March, there was plenty of snow on the Iditarod Trail, reminding many of the old days. Pete Kaiser got sick along the trail, and he lost his bid to win the Last Great Race, after taking first last year. As the pandemic reached Alaska, COVID-19 changed the nature of the trail, forcing mushers to stay out of most communities. The trail’s history is steeped in another epidemic. The Iditarod is based on trails used by dog teams many years ago to bring serum to save the lives of orphans in Nome during a diphtheria epidemic.

Also in March, the Yukon-Kuskokwim Health Corporation prepared to deal with the impacts of COVID-19, though at the time there were no confirmed cases in Alaska.

Statewide travel restrictions went into effect in the middle of March, and most villages in the region locked down, but not before the Lower Kuskokwim School District’s basketball tournament concluded in nail-biting fashion. On March 7, the championship games in both the boys and girls tournament came down to one possession. Both were matchups between Chefornak and Toksook Bay. Chefornak came out on top in both contests. Later there would be no basketball, as the pandemic cut a deep swath through the region.

Later in the spring, Bethel hired Vincenzo “Vinny” Corazza as city manager. He arrived to find the city trying to deal with the pandemic. City council members had concerns about his handling of federal CARES Act funds and his method of record-keeping. He resigned just a half year after taking the position. The city council again hired former Bethel City Manager Pete Williams to fill in. Williams is now one of two finalists for the permanent position.

Cama-i, the Alaska Native dance festival that brings Elders and dance groups into Bethel, was postponed and then canceled this year because of the pandemic, but COVID-19 did not stop the community from dancing. KYUK teamed up with the Inuit music group Pamyua, and together we produced a video of Alaska Natives dancing to one of Pamyua’s songs. The video went viral, bringing Yup’ik dance to fans all over the world.

Many airlines suffered when local communities and the state imposed travel restrictions, but Ravn Air Group went bankrupt. By April, Ravn had liquidated its assets; other carriers picked up its routes, hired the company’s former staff, and bought up some of its fleet.

When spring breakup approached, it brought two kinds of problems to upriver communities: how to evacuate from flooding, and how to do so while keeping enough distance to stay safe from the virus.

Graduation was also very different. Instead of crowding into a gym for a ceremony, many schools held their graduation ceremonies outside. Some delivered speeches on KYUK’s airwaves.

On May 28, a group of teenagers rescued five people from a forest service plane that crashed on a lake outside of Aniak. The teens were later honored by the Alaska Federation of Natives for both their initiative and competence in pulling the people out of the plane. The pilot and two of the passengers needed surgery for their injuries.

During the summer of 2020, the salmon did not show in predicted numbers. On the Yukon River, kings and chum failed to meet the treaty-required escapement into Canada. Kwik’Pak Fisheries in Emmonak had to pack up and go home because there were not enough salmon to bring to market. On the Kuskokwim River, kings, chum, and reds arrived late and low. In Kuskokwim Bay, fishermen revived commercial salmon fishing for the first time in five years.

For a while, it seemed like travel restrictions and testing would work to keep COVID-19 from spreading in Y-K Delta communities. But after the governor loosened statewide restrictions, cases appeared in the region. Bethel provided testing and quarantine options, but the city lacked the legal authority to enforce them. The virus began spreading in Bethel and many villages. The number of cases increased, and schools moved to remote learning. Many of the region’s schools never reopened in classrooms this fall. In villages with limited internet, that meant paper packets being delivered to homes until other options were provided.

In October, seven boaters traveling to Quinhagak never arrived in the community. Searchers have yet to find any evidence of the missing group.

For months, the Yukon-Kuskokwim Delta region has had the highest COVID-19 case rate in the state, and for a while, one of the highest rates in the country.

If that’s not bad enough, the minks in Bethel decided to go on a rampage, digging into chicken coops, leaving flocks dead all over town.

The elections in the region were also vexed by mishaps. Ballots failed to arrive for voters in both Newtok and Mertarvik during the primary election. In Bethel, some local voters protested during the regular election when the elections chairperson posted Trump campaign materials near Bethel’s only voting site.

Also in November, former Bethel Elementary School Principal Christopher Carmichael pled guilty to a federal charge of attempted coercion and enticement of a minor. Four girls allege that Carmichael abused them and are in court suing the Lower Kuskokwim School District, claiming that the district did not protect them.

With community spread of COVID-19 and everyone trying to limit interactions, AFN, Calista, AVCP, and many other groups and organizations held virtual conferences and meetings.

In December, there have been two incidents of Bethel police officers shooting people who the police say threatened officers with knives and axes. The last time an officer shot someone in Bethel was in 2014.

As we approach the new year, the Kuskokwim 300 sled dog race has been postponed until February. Schools remain closed and sports delayed until at least January.

But there is one piece of really good news. Vaccines have arrived in Bethel and many health care workers, Elders, and emergency workers will be starting the new year vaccinated against COVID-19. It is expected that there will be enough vaccine for everyone in the region before the summer is out.

Thank you for spending the year with KYUK. We appreciate you. Be well and have a Happy New Year! 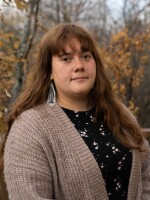 Greg Kim
Greg Kim is a news reporter for KYUK. In his past life, he worked as a software engineer in Seattle, WA. He visited Bethel in 2019 for the Kuskokwim 300, and decided he wanted to tell the stories of the people in the Yukon-Kuskokiwm Delta.
See stories by Greg Kim