Last week saw the highest seven day case rate of COVID-19 in the Yukon-Kuskokwim Delta of any week since December 2020. The Yukon-Kuskokwim Health Corporation (YKHC) reported 391 new COVID-19 cases in the region from Oct. 4 to Oct. 10. YKHC also reported three new hospitalizations in-region, two medevacs, and one death due to the virus during this one week period.

This is 96 more cases, or a 32% increase in cases, in the region compared to the previous week. Last week, there were 281 new cases, sixhospitalizations, and twodeaths.

Across the Y-K Delta, 14,317 individuals, or 75.7% of the eligible population, are fully vaccinated against the virus, according to state data.

In alphabetical order by community, over the past week YKHC announced four cases in Akiachak, fourin Akiak, twoin Alakanuk, 15 in Aniak, 14 in Atmautluak, 46 in Bethel, onenon-region resident in Bethel, one in Chefornak, five in Chevak, 15 in Chuathbaluk, three in Eek, five in Emmonak, four in Hooper Bay, 17 in Kasigluk, seven in Kipnuk, 30 in Kongiganak, one in Kotlik, 13 in Kwethluk, 29 Kwigillingok, seven in Lower Kalskag, 16 in Marshall, four in Mountain Village, 15 in Napakiak, one in Napaskiak, 20 in Nightmute, three in Nunapitchuk, five in Quinhagak, 79 in Russian Mission, two in Scammon Bay, onein St. Mary’s, five in Toksook Bay, twoin Tuluksak, one in Tununak, five in Upper Kalskag, and 10 in unnamed Y-K Delta vllages.

How does the Yukon-Kuskokwim Delta compare to state and national trends?

The Yukon-Kuskokwim Delta has a higher vaccination rate than both the state of Alaska and the U.S. So far, 14,317 people in the region have been fully vaccinated against the virus. That’s 75.7% of the eligible population compared to 58.7% of eligible Alaskans who’ve been vaccinated, and 66% of eligible Americans. 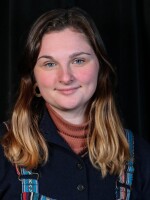